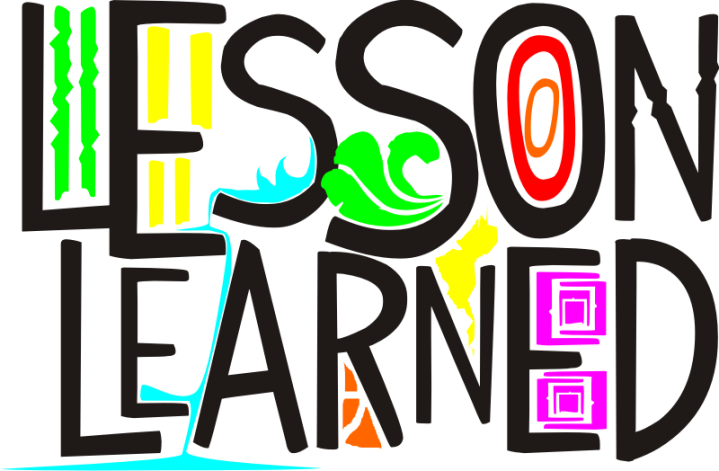 As I cross the halfway checkpoint of my Ph.D. studies, I am filled with a sense of awe and a hint of panic. As I previously described, there are many reasons to undertake a Ph.D. in Biology (here). But aside from the grand reasons for starting on this path, I find myself asking if there were any insights I’ve gained that I’d never anticipated. In this post, I want to share three key moments in my Ph.D. thus far that have influenced how I view research and academia in general.

Like many before me, when I began my studies I had grand intentions of how my experiments would proceed and had contingency plans. But, as I progress through my studies I realised that research is not as linear as I had anticipated. Now, I know what I’m saying is no news to many of you. But, for someone who has OCD tendencies and perfectionist attributes it is hard sometimes to “just go with the flow” as my cousin would say. I found it extremely difficult to let go and accept the new path unfolding in front of me. This experience has taught me that even with the best-laid plans, in research there must always be room for unexpected turns along the way and I now take solace in that fact.

Increasing advancements in science and technology have made it possible for scientists from different fields to find common ground and work together. I have found attending seminars outside of my narrow field of research not only provides a much-needed mental escape, but also increases the likelihood of meeting scientists who could provide a fresh perspective on my work. As I previously mentioned, identifying a possible collaborator is important, but also maintaining those collaborations. All great scientists of our time have all echoed this message – science does not flourish in a vacuum!

Yes, I know I just talked about meeting new people. But getting a PhD is perhaps the loneliest journey you’ll ever undertake, and nobody talks about it! Let me explain — nobody else on this planet will be as invested in your project as you, and only you have the power to make it a success. There will be times when even you will grow tired of saying “No, sorry I cannot join you today; I have to run a gel/experiment”, and your project starts invading and occupying every thought that comes into your mind. Ultimately, it all falls on you, and you really will feel alone. But, I do not want to leave you with just a one-sided story; just as nobody is as invested in your project, nobody is as EXCITED about your project as you. ALWAYS remember that! The passion will carry you through.

As I reflect on how far I have come in the short time I have been here, I am filled with excitement when I think about what the future holds. There is nowhere I would rather be than this exact point in time/space (Well, maybe somewhere high up in the Cederberg  🙂 ).

Staying motivated and focused in graduate school it is not an easy task, and in my recent blogs (here, here, and here) I shared tips and resources I use to survive graduate school. But, there is a far more powerful and enticing incentive to stay motivated-MONEY! It is of course welcomed in most scientific research (lab consumables, technical services, glassware…) and paying hard-working graduate students 😉 , but here I will discuss a more sinister and insidious aspect of money — when it is used to ‘motivate’ scientist to publish. I would like to preface this blog by stating that the thoughts and opinions expressed here are neither a condemnation nor an endorsement — that judgement I leave to you.

The route to academic success and tenure is paved with

the blood, sweat, and tears of newly appointed faculty members. In most countries, a new assistant professor (the equivalent of a senior lecturer in South Africa) is hired on a probation basis and after a set time (5-7 years) there is an evaluation. Then, depending on certain factors (number of students, external funding acquired, collaborators, and published articles) a judgement would then be made to either terminate or give tenure to the

person. This story focuses on the last issue — published articles. Now, all journals are not created equal and some have a higher impact factor(IF), and a publication in a high IF journals like such as: Nature, Science, Cell, and The Lancet usually guarantees tenure.

An article published in Science a few weeks ago sent shockwaves through the academic world when it revealed that most countries, notably China, Arab states, and South Africa where paying academics for publishing. However, this payment system opens a Pandora’s box- how much of the scientists’ publishing is fueled by greed and the need to enrich themselves? Will proper scientific conduct be upheld in order for academics to enrich themselves? How sustainable is this system in developing future scientists? Now, these questions are not without merit. In countries where this system has been put in place, there have been recorded occurrences of scientific misconduct (such as data manipulation, unethical experiments). No, I’m not saying that financial incentives always lead to misconduct, as unethical science occurs in “unpaid” systems too. But attaching a monetary value to an article certainly can nudge some to take that extra step towards cheating, if you were ever so inclined…

In South Africa, the rise up the academic ladder is contingent on multiple factors, publications being one of them. Primarily, most researchers in South Africa all seek the coveted NRF rating, and this has a great impact on the progress up the academic ladder. Your rating is strongly related to the number and quality of publications you’ve produced. Fair enough. But there is also a cash incentive system, which – in most cases – purely counts the number of publications (quality matters little).

A recent report highlighted that the ‘cash for publication’ system has led to increased research output at Stellenbosch University and North West University. Although both institutions state that it is “not all about money” they attribute the increased number of publications in international journals to the system. Of course, there are universities that do not provide these direct cash incentives (the University of Cape Town and the University of Witwatersrand, for example) and they have seen increases in research output, particularly publications in international journals. But the institutions that believe in the cash incentive system argue that it’s sometimes just the little shove that their academics and students need to take the extra step. After all, would you not be motivated to turn that minuscule little Honours thesis into a proper publication if it could get you some extra research money? Research (especially student-led research) may, therefore, become peer reviewed and published because of that extra financial lure.

For me, a report published by Prof. Catriona Macleod of Rhodes University (another university that does not offer these direct cash incentives) in South Africa perfectly echoes my sentiments on the matter. In it, she highlights three points of the incentive system that seem to be counterproductive, that is, 1) it leads to what she termed “salami-slicing” research, where instead of publishing a comprehensive paper there is an incentive to split that paper into several papers, 2) it discourages collaborations, as the money is shared equally between authors (more collaborators = less money), and 3) there is no distinction made between high IF journals and low IF journals. The tough call for many SA researchers is therefore that the cash incentive system works directly opposite to the prestige and career rewards associated with the NRF rating system (which focuses on quality, collaborations, and international recognition).

Admittedly, every researcher has their own motives for doing science and those would dictate their career trajectory. What keeps you motivated? What aspirations keep you in science?