I will end this year as I began it, with the dream of a wily, confident and adventurous eight year old. I have been one of the fortunate ones. I have always known what I wanted to do for a living. It was not continuously romantic (certainly didn’t feel that way while dissecting a human brain) but it was always there and it was comforting. I, unlike like some others, never found it predictable or boring but felt bolstered by the fact that I was moving in the right direction. But now, placed under extreme stress of being the only person in the world working on a particular project, significant personal changes and new responsibility, I have the current feeling that my clearly defined path has become a bushy wilderness- one out of which a tiger could leap out and take me. 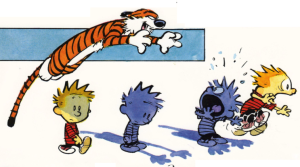 I’m sure that this is a common feeling for people approaching the milestone of 30 and probably has more to do with the feeling of mortality and less to do with the piling up of experiments you will never complete. Nevertheless, with 3 years to go to the big 3-0, I am acutely aware that I have particular comforts that I take for granted. As I close in on my final PhD year, I can feel the sense of loss of my eternal student status. I will now have to get a real job. What I do is challenging and often down right impossible but I have some very real perks. Starting the work day really whenever I feel I need to is a blessing. I have also realised, with a surmountable sadness, that at some point I will have to leave my wonderful lab – my scientific home for the last 5 years and 3 degrees. There is an incredible comfort in knowing where the pipettes or the hidden stash of reagents are. Having worked in the States for a couple of months, returning to my lab is nothing short of an epic homecoming.

Ultimately, at our core, scientists are creatures of habit. We need things just so – so that we can trace back to the point of a potential mistake. One needs to be in a routine so that methodically we can work out if that discovery was real or just a slip of the pipette. Life is a series of habits, and now I must shortly break them. The thought horrifies me. Looking forward, I’m sure there is a great amount of exciting new challenges to be had. Really though, all it feels like is a distant haze that is just beyond the steep precipice of doom that has recently presented itself. I have emerged from 2016, a year fraught with its own unique challenges (a Trump, a Brexit, a Zuma, a Gupta or 2) and I can’t see a fully cleared path. 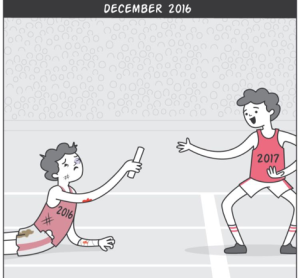 Instead, I catch glimpses of it out of the corner of my eye.

But, ever the optimist, I will keep looking until one reveals itself to me. I might need to use a panga to clear my own path, but this uncertainty too shall pass. It may pass like a kidney stone; but it will pass. Uncertainty leaves many different doors open and quite excitingly, in science as in life, we can find ourselves on quite a different journey than what we started out on. Openness to a swift change in direction is what leads us to the best discoveries. Life after a PhD is as confusing as life during one, but is just where stuff  gets good. It’s going to be a hell of a journey. Best grab my panga.

2015 and 2016 are arguably the Years of the Fallists in South Africa. From #rhodesmustfall to #datamustfall, there was a plethora of social media, and real world, campaigns calling for a radical break from the status quo.

It is very easy to argue that its merely populist elements raising their heads, or even more ominously, the emergence of a fascist element. Dennis Davis gives a sober warning about fallists, particularly academics, that support ‘disruption for its own sake, which in the current environment has violent undertones coated in warped identity politics.’

But to believe that this is a purely South African phenomenon is incorrect. Indeed the overall situation is a lot more nuanced than popular media would have us believe. These protests are taking place in the context of a global social shift. If you pay attention to the events around world, there is growing unrest with the status quo and people generally don’t trust institutions, particularly government. Rachel Botsman gave a TED talk about how people are increasingly losing trust in traditional institutions whilst simultaneously putting their trust in unknown entities and people.  In a recent Gallup poll, they have found Americans trust in their government and its related institutions are at an all time low. Many would argue that this distrust underpins Donald Trump’s meteoric rise. In South Africa, and rest of the continent, the picture is not very different.

In recent times, no institution has faced the level of upheaval than our universities which are at the coalface of the anger against the prevailing socio-economic system. A university, as some would argue, is a microcosm of society. Therefore, understanding and dealing with what is going on there, serves as a good basis for creating solutions on a larger scale.

Coming back to the South African context, often on social media, and in the real world context  people ascribe nefarious intent to heads of institutions but gladly follow mysterious people or processes. But does this mean that all traditional institutions, including universities, should fall? I don’t believe so. What I do believe its that there needs to be a drastic re-ordering of the our institutions if they have any hope of survival.

One of the key contours that should guide our re-ordering of the prevailing social milieu is ensuring the appropriate inclusion of women. It is one thing to decolonise the curriculum and ensure properly funded access for poor. But, without a concerted effort to ensure that women don’t get left behind, at any level, there can easily be a roll back towards a more intense patriarchy. We can already see the pockets of this in the fallist movements, where women and non hetero-normative activists, although being literally on the frontline, have been increasingly and sometimes violently side-lined. We can’t allow this to become the new status quo.

Without a doubt is that change is coming. Within our circle of influence we have an unprecedented opportunity to work towards building a just and equitable society. However, we have to be conscious where we place our trust. I would end with a quote for you to ponder from George Orwell’s 1984, which admittedly may be considered a bit subversive: “power is not a means; it’s an end. One does not establish a dictatorship in order to safeguard a revolution; one makes the revolution in order to establish the dictatorship”.