Did you know that South Africa has 12 Public Holidays in a year? That would be one holiday a month if they were fairly distributed in the year. South Africa would be ranked in 12th place alongside Finland and Russia if we were also added to the statistics of countries with the most public holidays. I cannot believe Cambodia has 28 public holidays in a year, must be nice living there especially since they are even ranked the 59th safest country in the world. Anyways enough about Cambodia and their nice life problems. I am talking about public holidays because just last month we celebrated National Women’s Day and now this month we are celebrating Heritage Day.

We celebrate Heritage Day in South Africa every year on the 24th of September, as a reminder of the nation’s cultural diversity and gives us a chance to express our unity as a nation. Forgive my ignorance but I just recently found out why we celebrate Heritage Day and how it came about (my brain can only process so much information at a time, knowing why we have pubic holidays was never on my list of things to know). Now that I do know, I will share with you.

The first Heritage Day was only instituted in 1995, this was after the first free election that spelt the end of apartheid and the beginning of a new, non-racially based democracy. However, what is more interesting about the roots of Heritage Day is that it precedes 1995. Before the 24th of September became a South African public holiday, it was just a Zulu holiday that was celebrated in KwaZulu-Natal only. This holiday was the remembrance to Shaka Zulu. When the bill was being passed in 1995 however, the Zulus were not happy that “Shaka Day” was not included. After long and tiring negotiations (I’m guessing), a compromise was reached where they would keep the date but broadened the meaning to include the celebration of not just the Zulus but all heritages of the South African people. And thus became the public holiday Heritage Day.

Do you know what else brings people together, other than democracy?

What makes research so beautiful is that it brings people from all over the world together for a common goal. This reminded me of Sesetu’s March blog post about “The beauty of diversity….perspective from an interdisciplinary study”. A great example of this would be the international collaborators that we have. For my Master’s research project, we collaborated with a research institute at the University of Madrid. I had the opportunity to visit their facilities to conduct experiments but the rest of the work was done via email. International collaborations are a norm when it comes to research. Having attended a few international conferences, I was astonished the first time that we could have people from all over the world in one room share research in the same field. I did not realize until then how research can bring people together from all over the world who all share the same common interest. 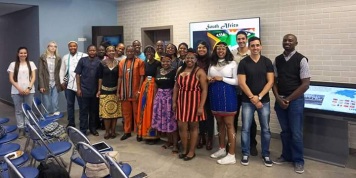 The cultural diversity that I see in just our department is remarkable. We have a good representation of the world in just one building amongst the lecturers, post-doctoral and postgraduate students. With the majority of my colleagues being of African descent; we have students from Egypt, Morocco, Zimbabwe, Lesotho, Kenya, Nigeria and the Democratic Republic of Congo (if you are from the Physics department and are reading this, I am sorry if I didn’t mention your country). I have learnt so much from every single one of them, from their cultures to their traditions and just about them in general.

In June 2017, I was part of the South Africa- Joint Institute for Nuclear Research (SA-JINR) student practice. The student practice involved taking a group of students from different Universities to a two weeks program at the Joint Institute for Nuclear Research in Dubna, Russia. The aim of the program is to expose postgraduate students to the facilities, gain experiences and hopefully form collaborations with researchers from the institute.  As part of the program, we celebrated International Day where all the participants had the opportunity to share their cultures starting from what we eat to how we dress and traditional dances. This was a great opportunity to learn about the different cultures in South Africa and from around the world.

So when we celebrate Heritage Day, we don’t just celebrate the South African cultural diversity but the cultural diversity of the world as a whole because these are the people we spend most of our time with on a daily basis. Science has brought me together with a diverse group of people I would have taken a lifetime to get to know and I embrace each and every single one of them.