The world out there is so harsh — “it’s a dog-eat-dog world” (but in my case I guess its chicken eat chicken). Everyone wants to be the next top dog or the next big cockerel. Since time immemorial, our local communities have had a number of “top chickens”, people that we could look up to. We admired them mainly due to their professions and how their professions transformed them to people that made a monumental contribution to society. If you were a teacher, nurse or priest in your community then people held you in great esteem; I guess I would know since my dad’s a priest. And as a “preacher’s kid” people expect you to take up the family business so to speak, but it doesn’t always happen like that. We can’t all become teachers, preachers, or nurses just because it’s in the family….

Unlike the olden days when career options were limited, people now have the opportunity to do or become whatever they want. I used to facilitate career guidance workshops when I was still at the University of Fort Hare Student Counselling Unit for local high schools and new university students; one of the things that we used to tell them is that they can be or do anything, as long as it’s aligned with their interests, values and capabilities. You can be a lecturer, researcher or psychologist if you want. Looking at the amount of people who have degrees currently, you can see that a degree doesn’t give you an edge as it did before. This means more people need to start changing their mind-sets from just doing their junior degrees, but to push on to do their postgraduate degrees. Having role models who have obtained their honours, Masters, PhD etc will be vital just to show the youth that it can be done.

I never thought I would end up doing a postgrad degree, but I’ve been fortunate to have role models who have shown me that it’s possible. I was blessed to grow up in a family where my sister Ntombentle has a Master’s degree in social work and my brother Zukile has a Master’s degree in law. I can still recall going to their graduation ceremonies and seeing myself being up there one day. The amount of time, dedication and perseverance that they had taught me a lot, I mean these were people who were working full time and yet managed to go this far. If you’re not working then what’s your excuse? My supervisors Dr Nkukwana and Prof Muchenje have too played a monumental role model role in my life. They both always motivate their students to study further since they see the importance of education to the African child. Being accomplished researchers in their respective fields does make the convincing a lot easier. If they could do it, coming from difficult backgrounds, so can I!

A few months back I thought it was basically my choice to decide if I want to do my PhD, but I don’t think so anymore. My ambition was originally to obtain my masters and start working. But not anymore. I want to one of the people that future generations will look back at and say “If it wasn’t for them, then we wouldn’t have studied or worked harder!” I know that our socioeconomic backgrounds may dictate otherwise but I know that it can be done. I would love to one day live in a world where people don’t have to struggle all their lives just to put food on the table. I’m not saying that academic Doctors are the richest people in the world, but studying hard and becoming a Doctor opens up a lot of doors for you.  Academic doctors work hard, but they don’t have to struggle with the basic necessities of life.

We’ve been complaining about the poor matric results in the Eastern Cape, but do you ask yourself, “What am I doing to improve that situation?” For me, doing a PhD (or any postgraduate degree!) isn’t entirely just for me, it’s for all those kids to see that it can be done. It’s my attempt to inspire better matric results in young people who will see what I can do – because I’m just an ordinary kid like them. If I can do it, why not them? Also, the idea of having my research being used by small-scale and developing farmers to grow their businesses sounds pretty cool. At the end of the day if it’s not about giving back then why bother?

With that being said I guess we can’t all have PhDs, and at the end of the day it’s not the only way to make the world a better place. But education is an immensely powerful way of making a difference. And for me, it’s one way to live my life as if it were a story that others want to read, a story that inspires them. For me, it’s how I live up to the ideals of our renowned former state president Nelson Rholihlahla Mandela, who said “education is the most powerful weapon which you can use to change the world”. This is how I want to live out the African concept of “Ubuntu,” which is the epitome of selflessness and giving back to the community.

I’m Sipho Patrick Mabusela, a Masters’ student in Poultry Nutrition at the University of Fort Hare in the Eastern Cape, South Africa. My research focuses on the use of unconventional plant protein sources as a partial crude protein supplement source in chicken diets. The goal is to reduce the cost of feeding, by partially reducing the inclusion levels of conventional expensive plant protein sources such as soybean in egg laying chicken diets without detrimentally affecting their performance and egg quality. 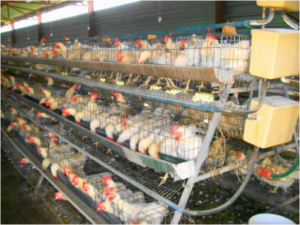 My research has some very practical implications, especially if you consider how much South Africans rely on eggs and chicken meat as an affordable source of protein!

As a young boy growing up in the Eastern Cape, pursuing a Master’s degree was never in any of my dreams. Actually, I was not even aware of anything related to a post-graduate degree. One thing I knew was that I wanted to work and help people in whatever career option I followed. Becoming a medical doctor was a clearer career path, because most people in my community and family could relate to my aspirations. Nevertheless, when I reached grade 12 my interest shifted from wanting to be a medical doctor to wanting to do a BSc in Animal Science.

Being a black child growing up in a family that had limited financial resources, I found myself thinking about attaining a junior degree that I could finish quickly, find employment and support my family. However, nearing the end of my junior degree, I was opening up to the idea that studying further wouldn’t be the worst decision in the world. The only limitation I had was funding. Fortunately, armed with good exam results, I applied for National Research Foundation funding and received it.

Everything changed for the better, even though after my first year as a Masters’ student, I realised that being a postgrad in a South African University with limited resources is a monumental obstacle. It not only affects your progress, but also impedes the quality of that progress. I was fortunate enough to have a supervisor (Dr Nkukwana) who always supported me and still continues to do so. She always ensured that I had the best facilities to conduct my Master’s research; and I think the rationale behind it was that she respects the integrity and quality of research. This is a principle that she has instilled in me and for that I am humbled and grateful.

When I sit and look at the past two years that I’ve spent as a Masters student, I realise that research is where I want to be. The irony is that as a black child living in rural South Africa you aren’t told about the possibilities that exist in research and development. As a result, I owe it to every black child out there to study further, attain my PhD and show them that it’s possible if you are willing to humble yourself and work hard. When I look at it now, I wouldn’t change a single thing even if I’d grown up in a family that had all the money in the world to support my original idea of becoming a medical doctor.