Why are there so many Irish communities around the world? Because nearly 25% of Ireland emigrated as a result of mass starvation caused by a plant disease in the mid 1800s. This disease, known as potato late blight, is caused by Phytophthora infestans.

Phytophthora is a Greek word that translates as ‘plant destroyer’ (phyto=plant, phthora=destroyer).

Phytophthora is the name of a genus or group of microorganisms that destroy plants by causing disease. Microorganisms that cause disease are referred to as plant pathogens. Pathogens in this group are responsible for many plant diseases around the world. For example, as mentioned previously, P. infestans already changed the history of the world, and is still causing issues today, even in South African potato and tomato fields.

Actually, the pathogen (Phytophthora ramorum) that causes Sudden Oak Death in the USA also causes ramorum blight in the UK, where it kills Japanese larch, an important timber species. One pathogen causing two major diseases on two continents! Both countries have spent millions trying to control the disease—not even counting the costs from damages, ecological impacts and increased regulations—yet South Africa may not even be looking out for it.

One species that is affecting South Africa is Phytophthora cinnamomi. This species, dubbed as the ‘biological bulldozer‘ in Australia, threatens South African proteas, orchards, vineyards and plantations. Even though this species is known to infect more than 2500 native species in Australia, we have a poor understanding of its impacts in fynbos here of South Africa.  This is one of the justifications for Cape Citizen Science, a research project focused on Phytophthora species in the Western Cape Province. You can contribute to this research and to the understanding of the impacts of Phytophthora cinnamomi by participating as a citizen scientist.

Unfortunately, because Phytophthora species are microscopic, they are frequently (accidentally) spread around the world. I like to think we are getting better at stopping this from happening, but the reality is that more plant pathogens are introduced every year—frequently from the global trade of live plants, but also potentially from the soles of our hiking boots. 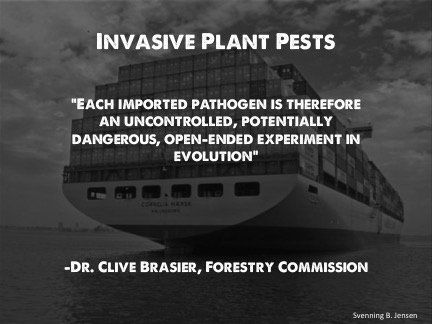 I can’t say what would happen if Phytophthora ramorum was introduced to South Africa (investigating this would be a cool research project), but after seeing the impacts of Sudden Oak Death first hand, I can say it is definitely worth watching out for. Hopefully if it is introduced, we can detected it early and eradicate it before it spreads too far to control, like it has in the UK and the USA. This is another justification for Cape Citizen Science. By reporting dying plants, you may be the first to detect a exotic and invasive Phytophthora species. The fynbos biome is immaculate because of the high amount of endemism—having many plant species that only exist here in South Africa.  Because of its incredible biodiversity, it is important to protect, and we can protect this biome by being on the look out for dying plants, reporting the ones that you come across. Cape Citizen Science is a platform for making these reports.